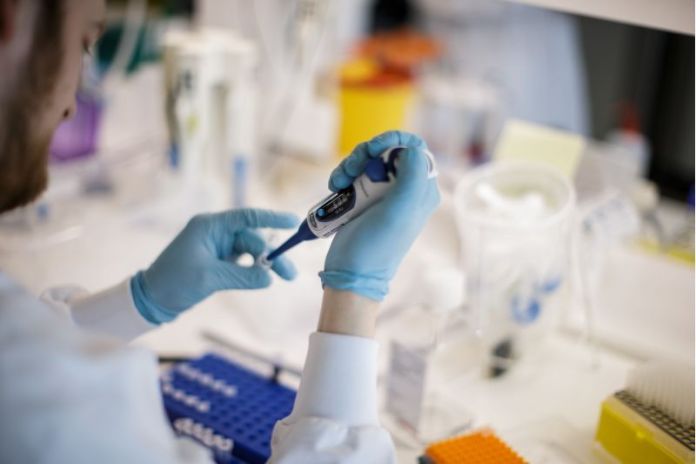 At least 20 projects seek a protective formula: results prediction in 2021 (photo: Thibault Savary / AFP)
Developing drugs is a difficult task. The performance of laboratory tests with cells in vitro, animals, and, later, humans, makes this process also quite time consuming. In view of the Covid-19however, time has become even more valuable. In an attempt to shorten or use it in the best possible way, scientists have joined efforts on three main research fronts: use of drugs already prescribed for other diseases, analysis of antibodies present in the blood of infected people and creation of vaccines. Experts point out that urgency requires faster work, but stress that all the care necessary to ensure that the proposed approaches do not further hinder the pandemic fight.One of the ongoing projects focuses on the combined use of two anti-HIV drugs: lopinavir and ritonavir. This cocktail was tested in China, but with results that may have been mitigated because many patients “were included late in the experiment, even after the 10th day of the infection”, according to Bruno Lina, professor of virology at Hospital Civils de Lyon, France .

Bruno Lina and other scientists are part of the Discovery research, which seeks drugs to fight Sars-Cov-2. The project, the result of a partnership with other European researchers, has positive results in the use of both drugs against the new coronavirus. “It is the ‘recycling’ of an HIV drug to block the virus from reproducing. We realized that, in the test tube, it works ”, says the French researcher.

Discovery is now in the clinical testing phase and plans to have 3,200 volunteers from various countries on the continent – Germany, Belgium, Spain, France, Holland, Luxembourg and the United Kingdom. In addition to HIV-fighting drugs, scientists will test the effect of remdesivir, an antiviral used to fight Ebola, and chloroquine, indicated for the treatment of malaria. The second drug has shown promise against Covid-19 in other scientific studies and has caused controversy due to the release of use, by the Brazilian government, for people in serious condition.

Discovery’s first phase of clinical testing began last week in France, where the four drugs will be applied to 800 patients. “The treatment started quickly for these people, since deadlines seem to be an important factor in this disease”, emphasizes Florence Ader, an infectious disease specialist at Hospital Civils de Lyon and one of the leaders of the research.

According to the scientist, the moment a substance shows “superior treatment”, it will be possible to propose its use to regulatory agencies. “The treatment can then be released very quickly, taking into account that we are in a situation of therapeutic need”, he adds. But Florence Ader asks for caution, since “the effects of these treatments are not yet known”.

Natlia Pasternak, a biologist and creator of the Questo de Cincia Institute in So Paulo, explains why the search for prescription drugs for other illnesses greatly reduces the time spent developing a treatment for Covid-19. “Because they are on the market, these molecules have already passed a safety and toxicity test. This makes it possible for us to skip stages, something extremely valuable in the current situation, in which we have urgency ”, he says.

Pasternak also points out that saving time is an important factor at the moment, but that it can cause damage. For this reason, the importance of caring for the results of work in progress is important, as in the case of chloroquine. “The study with this drug that took the most proportions was done by the French and had some errors. The researchers ignored patients who did not respond well to the use of the drug, including one of them giving up to continue due to adverse effects ”, details the expert.

The biologist highlights that prudence can avoid serious problems. “This is very important to consider, since most cases of this disease are resolved with the treatment of symptoms and respiratory support. By using such a drug, you can generate adverse effects and worsen the patient’s situation ”, he adds.

Alexandre Cunha, an infectious disease specialist and president of the Infectious Disease Society of the Federal District (DF), also emphasizes that the drugs under test must undergo validation in all standard stages before being prescribed. “This‘ everyone is using ’much out of our need, as doctors, to feel that we need to do something. We, who are used to always intervening, are facing a situation in which we only observe, and this causes us a lot of discomfort. But sometimes, ‘doing nothing’ is already doing a lot, “he says. “Our need to think that we have to give medicine even without proof can cause people to use chloroquine, immunoglobulin, in addition to antibiotics and everything else,” he warns.

The doctor recalls that studies with plasma, which has been tested in the United States, also present risks. The strategy is to use antibodies produced by people who have been infected with Sars-Cov-2 and have recovered from the disease. “In the 1980s, they thought that this alternative was safe, but it was not known that problems such as hepatitis C and HIV could be transmitted by blood, and many complications occurred. In this case, we are also not sure, and we may face other difficulties due to these debts ”, he stresses.

The challenges of immunization

While many scientists are looking for drugs to treat Covid-19, another part of experts faces an even greater and more time-consuming challenge: creating vaccines. According to the World Health Organization (WHO), at the end of last month, more than 20 vaccines to combat the pandemic were under development, in initiatives by colleges, research centers and pharmaceutical companies.

One of the most advanced North American. On the 17th, scientists from the National Health Institute (NIH) announced the beginning of the first phase of clinical studies with a protective formula. The work involves 45 volunteers aged between 18 and 55 years. “The scientists were working on an investigation of a vaccine against Mers (respiratory syndrome of the Middle East), which brought an advantage in the development of the vaccine against Covid-19”, highlights the team, in a statement. Immunization has been shown to be efficient in animals and needs to undergo two other phases of clinical examinations.

Brazilians also face this challenge. Researchers from Instituto do Corao (InCor), in So Paulo, use the same technology as Americans: a technological platform that produces synthetic messenger RNA molecules, which instruct the production of proteins recognizable by the immune system. The idea is that the defense of the infected person’s body recognizes artificial proteins to later identify and fight the real virus. “We believe that the strategy is very promising and can induce an immune response better than that of other proposals”, says Jorge Kalil, director of the Immunology Laboratory at InCor and coordinator of the project, in a communiqué with the Fapesp news agency.

Flvio Guimares da Fonseca, virologist at the Vaccine Technology Center (CT Vacinas) and researcher at the Department of Microbiology at the Federal University of Minas Gerais (UFMG), explains that immunization formulas take time to be developed due to the entire testing process. However, according to the expert, the large number of groups engaged in research and the use of different strategies may streamline this process.
“Many lines of study have been carried out. Here at UFMG, we are exploring the same approach taken for the dengue vaccine. In it, we take a virus more similar to the one studied and look for antibodies that respond in a similar way. We use the influenza virus, which causes normal flu, due to its similarities to that of Covid-19 ”, he explains.

The virologist points out that, despite the worldwide efforts, a vaccine will probably only emerge in 2021. “It is a long battle, as using a formula in the entire population that protects against a certain disease requires a high level of safety. Even so, if we consider that a dengue vaccine took 15 years to develop, we can consider it quickly if we have an option like that next year, ”he says.